Things to do in Budapest: Attractions and places to visit

Old and new are close together in Budapest. While the historical castle quarter on the Buda Danube side still seems to have a touch of the Middle Ages, the lively shopping and trendy quarters on the Pest side are in no way inferior to those of other European metropolises.

The two opposing parts are connected by 12 bridges in the city area. Among them some of the oldest and most beautiful in Europe.

The Hungarian capital has much more to offer than just goulash soup and coffee house culture. Picturesquely situated between the Hungarian low mountain range and the great lowlands, today it is home to 1.7 million people.

This corresponds to almost one fifth of the not quite 10 million Hungarians. In addition, there is a constantly increasing number of tourists and visitors from all over the world, who are attracted by the city’s sights, but also by its extensive cultural offerings.

Below we present you the most exciting tours, the most beautiful attractions and the best sights in Budapest:

TOP10 Things to do in Budapest: Table of Contents 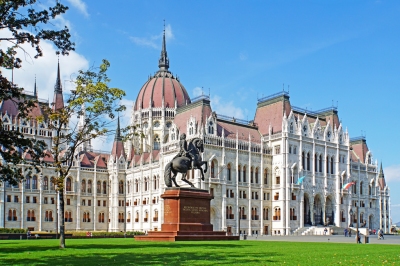 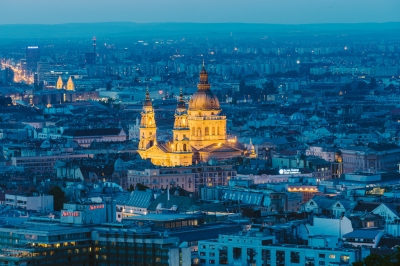 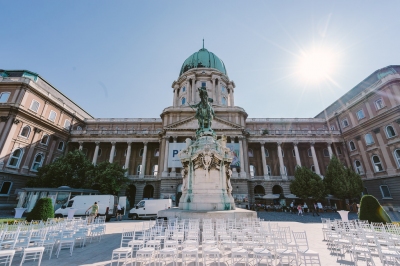 The Hungarian parliament is today one of the largest government buildings in the world. It was declared a UNESCO World Heritage Site in 1987. Directly on the eastern bank of the Danube between Margaret Bridge and Chain Bridge, the imposing building with a red dome roof visible from afar was completed in 1904 as a new home for the Hungarian parliament. The dome has a height of 96 meters. The neo-Gothic façade is impressive with a total of 365 towers and large windows.

The interior of the Parliament is worth seeing and can only be visited during a guided tour. But the participants get to see two Hungarian treasures. The Stephen’s Crown and the imperial insignia in the cupola hall. For the Hungarian people, the crown is a symbol of their country and its historically most valuable possession. On the other hand, an exhibition on the history of Hungarian democracy is accessible without accompaniment.

The Chain Bridge is the landmark of the city and is depicted on countless travel guides, postcards and souvenirs. And for good reason, because without the chain bridge there would be no Budapest. Only in 1849 did it establish the first permanent connection between the two still independent cities of Buda and Pest. It is officially named after Count István Széchenyi, who initiated its construction in 1839.

Some legends entwine around Széchenyi’s inspiration. Some say that he had found his love on the other side of the Danube, while others claim that he had missed his father’s funeral by crossing the Danube too long and was therefore looking for a simpler way to cross the river. Especially impressive is the chain bridge in the evening with the lights on.

The oldest foundations of Buda Castle date back to the 13th century. The building, which today stands on the square of the historical castle, is in large parts only a reconstruction of the 18th century baroque castle built by Empress Maria Theresa, but it also houses three museums worth a visit: the Hungarian National Gallery, the Budapest Historical Museum and the National Széchényi Library.

Adam Clark Platz is located directly at the chain bridge on the Buda side. From here, one of the oldest funiculars in Europe takes visitors up to the forecourt of the castle. The view over the Danube, its many bridges and the opposite bank with the parliamentary complex is impressive both during the ascent and from the castle square.

Budapest: 3-Hour Grand City Tour and Castle Walk
Tours
235 Reviews
from 28 $ »
See the best of the Hungarian capital on a coach tour of Budapest. Admire iconic buildings such as the Parliament and St. Stephen’s Basilica. Enjoy a guided walk in the castle area on the Buda side and see the Fisherman’s Bastion and Matthias Church.
Budapest: 24, 48 and 72-Hour Hop-On Hop-Off Bus Tour
Bus & Minivan Tours
1304 Reviews
from 26 $ »
Explore Budapest at your own pace with a 24, 48, or 72-hour ticket on this open-top hop-on hop-off sightseeing bus. Enjoy engaging commentary as you wonder at the views of the Hungarian Parliament Building, Margaret Bridge, and the Danube River landmarks.
Budapest: Széchenyi Spa Full Day with Optional Pálinka Tour
Culture & History
7100 Reviews
from 26 $ »
Relax at Széchenyi, the most famous spa in Budapest, and enjoy an optional free interactive pálinka spirits-tasting tour where you will discover more of the history and culture of Hungary.

The 140m long white wall of the Fischerbastei also offers an almost just as fantastic panoramic view of the eastern bank of the Danube as from the castle complex. The complex was built at the end of the 19th century on the site of the former Budapest Fish Market for the Fishermen’s Guild, which had been responsible for defending the city walls in this area since the Middle Ages.

Within its walls lies one of Budapest’s most famous sights: the Matthias Church. The coronation ceremonies of Emperor Franz and Empress Sisi took place here. The most striking elements of the church exterior are the typical colourful roof tiles of Zsolnay ceramics and the Matthias Tower, which can also be climbed.

There are 120 hot springs in the urban area of Budapest and therefore a corresponding thermal bath culture. Since the early 1930s, the city has officially been allowed to call itself a seaside resort and is thus the only European metropolis that is also a health resort.

One of the most beautiful and popular baths is the Gellert Spa.

It was opened in 1918 as part of the Hotel Gellért at the foot of the Gellerberg. After the hotel and with it the bathroom had been largely destroyed in the Second World War, it was finally rebuilt in 2008 in old splendour. The Gellert bathroom consists of three outdoor and ten indoor pools. The highlight is a wave pool under the open sky surrounded by mosaic-covered walls.

In the middle of Budapest, an old quarter has awoken to new life in recent years. Neglected in the post-war reconstruction of the city, the Jewish quarter today takes advantage of the rustic charm of its hidden backyards and dilapidated houses. During the day you will find interesting studios and cosy cafés here. In the evening, the young scene moves into the trendy ruin bar of the party district.

This is one of the most important sights of Budapest: the second largest synagogue in the world. From the outside its design is reminiscent of the Moorish architecture of the Alhambra, inside its Torah shrine is particularly worth seeing. The crying silver willow of the sculptor Imre Varga, which is reminiscent of the Holocaust, is a coveted motif for souvenir photos.

Budapest: The Great Synagogue Skip the Line Ticket
Tours
2134 Reviews
from 21 $ »
Skip the line and visit the Great Synagogue. Take a guided tour of the synagogue and its grounds. Learn about the daily life of the Jewish people in Hungary before and after WWII at the Hungarian Jewish Museum and see the Emmanuel Memorial Tree.
Budapest City Discovery Tour
Tours
5 Reviews
from 28 $ »
Take an informative, 3 hour bus tour of all of the top sites in Budapest. Discover the Castle District and Fisherman’s Bastion, and learn about Budapest’s fascinating history while enjoying panoramic views of the Danube.
Budapest: 1-Hour Sightseeing Cruise with Welcome Drink
Tours
5918 Reviews
from 9 $ »
See the sights of Budapest from the River Danube on a 1-hour sightseeing cruise, and enjoy a seasonal cocktail or soft drink along the way. Glide past landmark monuments such as Buda Castle and the Vigado Concert Hall.

The St. Stephen’s Basilica is located in the centre of the city, on the Szent István tér, paved with ornamental stones, which invites you to linger in the summer with its bars and cafes around the fountain. Her eponym is King Stefan the Saint. The right hand of this Hungarian state founder is preserved in one of its chapels as a relic.

If you like, you can climb the tower over a spiral staircase and enjoy the wonderful view over the city centre. The Kitchtower is exactly 96 metres, as is the dome of the Parliament. Inside the church some footballers of the “Golden Team” of 1954 are buried, among them the legendary Ferenc Puskás.

Those who have enough time in Budapest to yearn for some relaxation and recreation should visit the green heart of the city on Margaret Island. This can also be reached by tram via the bridge of the same name, but is particularly suitable as a destination for a leisurely cruise on the Danube.

The 2800 metre long Danube island is often referred to as “Budapest Central Park” because it attracts athletes and walkers among the capital cities. In the former royal hunting ground there are plane trees, avenues and statues, the casino designed by Miklós Ybl, the old water tower and a Japanese garden as well as the popular Palatinus beach bath.

On three levels there is another interesting sight of the city, the large market hall of Budapest. Fruit, vegetables and meat, but also souvenirs and typical Hungarian handicrafts are offered. While many Hungarians also buy their food on the ground floor, the upper floor, with its diverse range of souvenirs and culinary delights, is more touristy. Who would like to try a typical goulash soup or the Langosz, has here large selection.

In the basement there is a supermarket and the testimonies of a once important fish market. The market hall is directly connected to the Danube. The exterior façade of the hall, completed in 1897, with the side towers and the traditional brick façade, but above all with the typical colourful roof tiles of the Zsolnay manufactory, is also an eye-catcher.

Budapest: Margaret Island Day Spa Entry Ticket
Activities
12 Reviews
from 19 $ »
Enjoy a relaxing day spa and escape the noises of the busy city center. Access the indoor and outdoor pools, the sauna, and embrace the world-famous Hungarian spa culture.
Organ Concert in St. Stephen’s Basilica
Music Activities
425 Reviews
from 32 $ »
Listen to an enchanting organ concert in one of the most beautiful neo-classical buildings in Budapest.
Budapest: Evening Cruise including Drinks and Live Music
Tours
1879 Reviews
from 15 $ »
Hop on the evening cruise and discover the gorgeous Hungarian capital while sipping your favorite drink. Start from the city center and cruise along the Danube river while exploring many historically and culturally important sites.

Seen from the centre, Heldenplatz is located at the end of the long Andrassy Ut shopping street. In its centre stands the 36 metre high column with the statue of the Archangel Gabriel. Around them the statues of the heroes are arranged in two half arches. These are statues of well-deserved personalities of Hungarian history created by the sculptor György Zala.

The Heroes’ Square and Andrássy út are UNESCO World Heritage Sites. At the edge of the square there are two museums worth mentioning. On the right the Kunsthalle, and on the left the Museum der Bildenden Künste. They exhibit works by Dürer, Rembrandt, Goya, Monet and Rodin, among others.

More things to do and activities for your Budapest holiday

We recommend the following months as best time to travel for exploring the attractions and acivities of Budapest:

You can find more information about the weather, including all climate data, on our climate page for Budapest.

You already did a Budapest holiday and know other sights or interesting places? Then share your travel tips with us and our website visitors. Among all submissions, we’re giving away a travel voucher worth 1000 $.