Things to do in cos: Attractions and places to visit

The island of Kos belongs to the Greek Dodecanese Islands located in the southeastern Aegean Sea. As the third largest of its 18 inhabited islands, its northern tip reaches up to about 5 kilometres to the Turkish peninsula of Bodrum. Its capital, also located in the northern part of the island, which bears the name of the island of Kos, has about 19,500 inhabitants and, together with its surroundings, represents one of the six municipalities of the island.

The language of the inhabitants is modern Greek, Greek letters are used for the writing. Like many of the Greek islands, tourism is the main economic sector. In Kos, the latter benefits above all from the long, white sandy beaches and the charm of small villages, some of which have already been abandoned.

In the following we present you the most exciting tours, the most beautiful attractions and the best sights on Kos.

TOP10 Things to do in Cos: Table of Contents 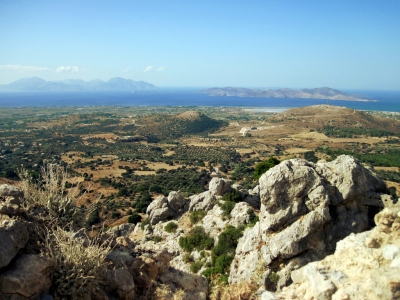 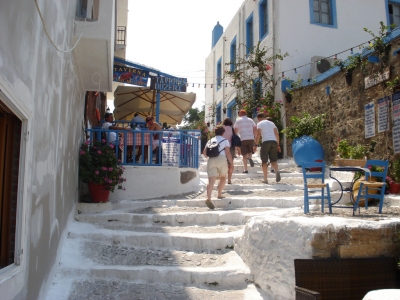 One of the most attractive sights that Kos City has to offer as the capital of the island is the St John fortress Neratzia. Their mighty complex is located on the east coast of the island on a small peninsula near the city harbour. Built between the 14th and the beginning of the 16th century and extended at the same time, it now covers a large part of the peninsula.

Built as a bulwark before the Ottomans and pirates, the fortress also served to control shipping traffic. Only a few years after its completion, the fortress of the Order of St John was abandoned and is now a ruined town with the remains of its walls, buildings, battlements and staircases, and can be visited both from the outside and inside.

Not far from the fortress, opposite its entrance, the plane tree of Hippocrates can be admired. Legend has it that it was planted by Hippocrates, the forefather of modern medicine, in the 5th century B.C. and that he taught under it. Although the place Kos did not exist at that time and the existence of the plane tree hardly might have survived the many centuries, it is considered as one of the sights of Kos.

Surrounded by a small wall there is a cleaning fountain next to it for visitors of the neighbouring, today dilapidated loggia mosque. The plane tree itself is supported by iron bars. The diameter of trunk and crown is about 4 and 18 meters respectively. Several young shoots growing from their roots testify to their enduring vitality.

Not far from the port of the island’s capital, the Archaeological Museum is another of the many sights on Kos. In six rooms of the Arcaeological Museum interested visitors can inform themselves about Greece’s history as well as about valuable objects found during excavations or after an earthquake.

In addition to sculptures from various eras, they also include magnificent mosaics and reliefs. Since the museum is located in an ancient Roman villa, its inner courtyard with an antique floor mosaic can also be admired. A visit to the Archaeological Museum is especially recommended on days with somewhat worse weather or as a balance to beach life.

From the Port of Kos: Full Day Boat Cruise to 3 Islands
Tours
1212 Reviews
from 32 $ »
Enjoy a fun and relaxing cruise to 3 islands near Kos. Swim in crystal clear waters and explore traditional villages. Enjoy lunch on board and taste cocktails prepared for you by the crew.
From Kos: Nisyros Island Volcano and Panagia Spiliani
Tours
377 Reviews
from 33 $ »
Enter a volcanic crater on Nisyros & experience lava rumbling beneath your feet. Stroll the streets of Mandraki & visit the monastery of Panagia Spiliani.
From Kos: Boat Tour to the Volcanic Island of Nisyros
Tours
251 Reviews
from 35 $ »
Visit the volcanic island of Nisyros and enjoy an adventure. Drive to the crater of the volcano and marvel at its strange lunar landscape. Stroll through Mandraki with its traditional tavernas.

4. Hike on the Dikeos

You will be rewarded with a beautiful view over the coast and the neighbouring islands off the Turkish mainland for the quite bearable strains of the ascent. A visit to the Metamórfosis tou Christoú chapel near the summit is also worthwhile.

In the eastern part of the north coast of the island of Kos lies Tigaki, one of its most popular holiday resorts. In addition to several hotels, it offers supermarkets and restaurants, souvenir shops and a pharmacy and is easily accessible from Kos City by bus or taxi. A bright sandy beach surrounded by shady trees stretches out from the village, inviting you to relax, swim and do water sports.

Behind the dunes, which border the beach at its western end, lies the salt lake Alikes. The extraction of salt was completed in 1990 and the lake was placed under nature conservation. Walking along a circular path that surrounds it, you can observe beautiful views as well as, with a little luck, flamingos or a water turtle.

6. The enchanting mountain village of Zia

In the mountainous Dikeos region, above the village of Asfendiou, lies the mountain village of Zia, the highest village on the island of Kos. Surrounded by olive, cypress and pine groves, the greenery of which is protected by some springs, it has about 100 inhabitants. The place welcomes the numerous tourists in several restaurants.

From their terraces you can watch the most beautiful sunsets on the island announced as attractions. Zia is also known for the spices and herbs offered here, for its small church painted in Byzantine style, an old water mill and the adjoining, very family-friendly small nature park.

Kos: Island Tour to Asklepieion and Zia
Tours
109 Reviews
from 42 $ »
Enjoy an island tour dedicated to the beautiful landscape of Kos. Discover the place where the Hippocratic Oath was written, admire the idyllic mountain village of Zia and taste the typical cinnamon water.
Kos: Three-Island Cruise with BBQ Lunch
Tours
160 Reviews
from 32 $ »
Experience an unforgettable three-island cruise on a unique pirate-style boat.
Kos: Full-Day Jeep Safari with Lunch
Tours
113 Reviews
from 108 $ »
Explore Kos, the island of Hippocrates, on a 4X4 tour. Head to the peak of Mount Dikaios on unpaved mountain roads. Stop to enjoy a Greek lunch.

The coastal town of Mastichari offers a ferry service to Kalymnos, as well as several unspoilt beaches and opportunities for strolling and shopping. However, its biggest sightseeing attraction, or rather a sought-after excursion destination, is its water park Lido.

It has an area of around 80,000 square metres and is therefore the largest of its kind in the Aegean. Equipped with several swimming pools, slides and whirlpools, a separate area for children and gastronomic facilities, it offers an exciting holiday experience for young and old.

Pyli is located in the central part of the island of Kos above Marmari. The village itself invites to a contemplative stroll, where you can discover the Charmylos tomb with a small chapel as well as a traditional farmhouse. The actual sightseeing of the old Pyli called Palio Pyli can only be admired after an arduous ascent.

The long abandoned village is dominated by the ruins of a fortress built in the 11th century. For those who are not afraid of the ascent to it, there is an impressive view over the north coast of the holiday island. Two churches, also from the 11th century, belong to the abandoned and more or less heavily dilapidated buildings. Above Palio Pyli a small tavern invites you to linger.

9. The peacock forest near Plaka

Near the airport of the island there is a forest park, where numerous peacocks but also turtles and stray cats can be found among the pine trees. The majestically striding peacocks, which communicate with loud calls, naturally expect a little food and reward this with the beating of a colourful wheel.

Often also the offspring accompanying the proud animals can be admired. Picnic under the shady canopy of the park is allowed, a barbecue area and even a clear water source are available. The peacock forest is an ideal destination for a family outing.

Kalymnos, Pserimos & Plati Island Cruise with Hotel Transfer
Tours
17 Reviews
from 58 $ »
Enjoy a day full of sun, sand and sea and get to know the islands around Kos. Take a small boat to the islands of Pláti, Kálimnos and Psérimos and admire the unique features of the islands.
Kos: Private Transfer to/from Kos Airport (KGS)
Transportation
4 Reviews
from 71 $ »
Book a private airport transfer between Kos Airport (KGS) and your accommodations in Kos and save yourself some stress. Enjoy meet-and-greet service at the airport and get some help with your bags.
Kos: Explore More in Kos
Tours
3 Reviews
from 108 $ »
Explore more in the island of Kos on a semi-private safari tour, enjoy the best panoramic view of Kos and Dikaios Mount.

The Mediterranean island of Kos, with its numerous beaches fulfilling the most varied requirements, is considered a true bathing paradise. One of the most popular is the Paradise Beach on the south coast. Easy to reach by rented car or bus, it lies in a picturesque bay and is covered in fine white sand. Without the nowadays often usual scenery of big hotel buildings, he spreads an almost Caribbean flair.

The beach with its clear water invites you to swim and snorkel. Its attractiveness is increased by bubbles rising in the water, which are formed by volcanic gases and give the beach the nickname “Bubble Beach”. However, the gases are completely harmless! Cafés, restaurants and showers are within easy reach for a relaxing beach day.

More things to do and activities for your Cos holiday

Kos: Sunset Safari Tour with Dinner
Tours
3 Reviews
from 85 $ »
Enjoy a safari to Mount Dikaios, the perfect spot in Kos for watching the sunset. Visit a tavern in Zia for a traditional dinner.

Best time to visit Cos

We recommend the following months as best time to travel for exploring the attractions and acivities of Cos:

You can find more information about the weather, including all climate data, on our climate page for Cos.

You already did a Cos holiday and know other sights or interesting places? Then share your travel tips with us and our website visitors. Among all submissions, we’re giving away a travel voucher worth 1000 $.