Things to do in Fuerteventura: Attractions and places to visit

Fuerteventura is particularly known for its wide, white sandy beaches. The Canary Island has so much more to offer: rugged mountains, striking rocky coasts and a legendary villa in the middle of no man’s land. There is also no shortage of man-made attractions such as zoos, promenades or museums. The island lies in the Atlantic Ocean and is about 120 kilometers away from the Moroccan mainland.

However, Fuerteventura, like the other islands of the Canary Islands, belongs to Spain – and thus also to the euro zone. This means that there is no need to exchange money and an identity card is sufficient for entry. Because of the mild climate throughout the year, the second largest land mass in the Canary Islands after Tenerife is also known as the “Island of Eternal Spring”.

It never gets colder than 13 degrees, the maximum temperature is 29 degrees and the sun shines over 300 days a year. Therefore many people from Europe come to Fuerteventura especially in winter to escape the dirty weather in their homeland and to relax. The short flight duration is also attractive for holidaymakers. Thus, from Frankfurt, one only needs 4:30 hours to get to the island.

Below we present you the most exciting tours, the most beautiful attractions and the best sights on Fuerteventura.

TOP10 Things to do in Fuerteventura: Table of Contents 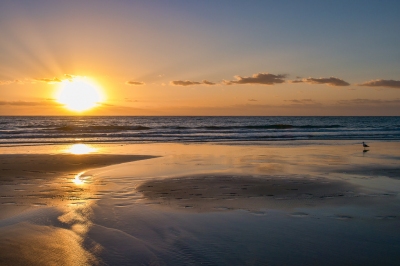 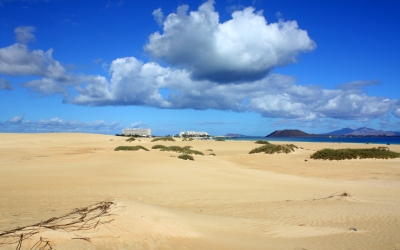 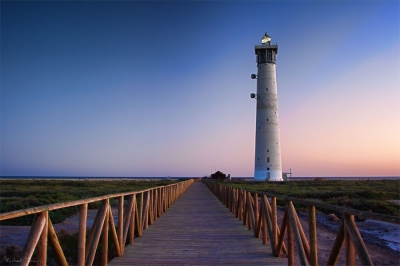 The most popular resorts are located on the JandĂ­a peninsula in the southern part of Fuerteventura. In addition to the seaside resort of JandĂ­a Playa, Morro Jable, the administrative centre of the region, should be mentioned first and foremost. In both small towns there are numerous bars, cafĂ©s, restaurants and shopping facilities. Extended walks along the beach promenade are also highly recommended.

The promenade of Jandia leads picturesquely along the azure blue sea. You should also walk at least once to the beautiful lighthouse of Morro Jable to watch the sunset. In the background, steep mountain ranges rise up, inviting you to hike. A unique play of colours awaits you, which is especially popular with couples.

A paradise for windsurfers is the Playa de Sotavento, which lies in the south of the peninsula JandĂˇ. The five-kilometer-long sandy beach is divided into two sections by cliffs that rise into the sea: Playa Barca and Playa Risco del Paso. The spectacular colours are impressive at this place: black rock meets light sand and turquoise sea like from a picture book.

Because the wind is very strong here, the beach is less suitable for sun worshippers than for surfers. No wonder that the magnificent waves of the Fuerteventura World Cup are accompanied by windsurfing and kitesurfing at Playa de Sotavento. In addition to surfers, couples who want to enjoy a secluded beach walk also get their money’s worth here. Because there’s not much going on on this beach.

Even lonelier is the Playa de Cofete. Situated in the very south of the island, the eleven kilometre long beach invites you to take long walks. The panorama is simply outstanding and makes Playa de Cofete one of the most beautiful sights on Fuerteventura.

For Cofete is a bizarre place: black mountains in the background, endless sandy beaches in front of them and often no human soul can be seen. Because the journey over a bumpy road does not take many vacationers on itself. Unjustly, because even if bathing is not recommended here due to dangerous undercurrents, the excursion is worthwhile simply because of the magnificent landscape.

Fuerteventura 2.5-Hour Dune Buggy Tour
Tours
318 Reviews
from 100 $ Â»
Discover the spectacular landscapes in northern Fuerteventura in a PGO 600 buggy. Enjoy driving on and off-road, with the island’s best buggies. You will spend 70 percent of this tour off-road.
Fuerteventura: Return Lobos Island Ferry Ticket with Entry
Nature & Adventure
301 Reviews
from 18 $ Â»
Visit Lobos Island on a boat cruise from the picturesque Corralejo on Fuerteventura. Discover an island which is a protected natural park and walk along its wonderful beaches and paths, accessible for everybody.
Fuerteventura: Water Taxi to Lobos Island
Hop-on Hop-off Tours
130 Reviews
from 16 $ Â»
Take a half-day trip to the neighboring Isla de Lobos with a water taxi. You can catch the boat from Corralejo Harbor, before enjoying the scenery on the short, 15-minute ride to Lobos. Once there, you will be free to enjoy the nature of Lobos island.

Another important attraction of Fuerteventura is located directly at the Playa de Cofete: the legendary Villa Winter. Many stories and myths entwine around this place. Every visitor quickly feels the mysterious atmosphere that surrounds the place. A weathered path leads to the estate, which the German engineer Gustav had built in 1936 at the foot of the mighty mountains. The former owner of the villa is said to have cultivated a close relationship with Adolf Hitler and after the war helped numerous Nazi henchmen to flee to South America via the island.

Rumours that even a submarine base or bunker was to be built here could neither be proven nor invalidated. The owner himself stated that he had settled there to grow tomatoes – which is hardly possible due to the landscape. Because neither the engineer, who died in 1970, nor today’s residents provide information about the background of the building, much speculation remains. It is always interesting to experience the atmosphere at this mysterious place.

Another mysterious place is the fishing village of Ajuy on the west coast. A real pirate cave is waiting to be explored in the settlement built far off the beaten track. North of the bay where the village is located, a narrow path leads past the cliffs. Along an ancient lime kiln and a ship ramp we go to the bay Caleta Negra.

Here are sights of special kind: up to 600 meters deep caves, in which formerly buccaneers hid their riches. Those who dare can explore the abandoned corridors today. The access starts at the black lava beach and also leads past the old ship’s ramp. Ajuy is also great for a combination with the rock gate Pena Horadada!

In addition to the surfing and walking beaches described above, there are also great beaches on the island. Especially suitable for families with small children is Playa de Esquinzo, located in the south of Fuerteventura. The fine sandy beach drops shallow into the turquoise blue water and the surf here is not as strong as elsewhere.

A short walk takes you here to Playa de Matorral, which is ideal for those seeking peace and quiet. There are several cafĂ©s and restaurants to cater for your every need. On the north side of the island, the Playas de Corralejo are particularly enchanting, spreading out in the midst of the dunes, which are under nature protection.

Lanzarote: Half-Day Chill Out Cruise at Papagayo Beach
Tours
73 Reviews
from 67 $ Â»
Climb aboard a yacht for a 4-hour cruise along the Costa de Papagayo on Lanzaroteâ€™s southwest coast. Relax as you sail past magnificent beaches. Take a dip in the crystal clear waters, and savor the most delicious barbecue you will ever eat on a boat.
From Corralejo: Lobos Island Entrance and Snorkel Activity
Nature & Adventure
75 Reviews
from 25 $ Â»
Join this mini cruise and snorkel adventure. Enjoy a short boat trip with underwater views and be immersed into the fascinating underwater world of Lobos Island.
From Corralejo: Round-Trip Ferry Transfer to Lobos Island
Nature & Adventure
35 Reviews
from 16 $ Â»
Enjoy a safe and comfortable 20-minute journey from Corralejo to Lobos Island by express ferry. Explore the stunning volcanic island at your leisure before selecting one of two convenient afternoon departures to return to Fuerteventura.

The historic town of La Oliva is also worth a visit. Historical buildings still bear witness to the former importance of the island’s capital. One of the most beautiful sights is the church Iglesia de Nuestra SeĂ±ora de la Candelaria in the center.

The black bell tower is made of volcanic rock and forms an exciting contrast to the white glowing rest of the sacred building. In the Casa de los Coroneles, the former seat of the military colonels, there is today a museum that offers insights into the history of the island.

In the north of the island, not far from the village of Corralejo, a spectacular dune landscape has formed over the years. On the one hand fed by sand that is blown over from the Sahara, on the other hand formed by shell limestone, desert-like and meter-high elevations of light sand tower up here.

Travellers should definitely take a trip on the FV-1 road through the fascinating landscape and take a little walk. Especially impressive are the shifting dunes of Furteventura, which always stay in motion thanks to the steady trade winds – a great spectacle!

Square water basins cover the east coast at Caleta de Fuste. The old brine basins of the Salinas del Carmen salt extraction plant extend as far as the eye can see. Salt was mined here until the early 1980s. Today, a museum on this site provides information about the mining and once flourishing trade in white gold.

It is exciting to see the salt in the various stages of drying in the outdoor facilities and to receive many explanations and information on this topic. Together with the salt museum El Museo de la Sal, the salt flats are among the most popular sights of Fuerteventura.

The Oasis Park is located in the southeast of Fuerteventura. Not only families with children get their money’s worth with interactive encounters with the animals living in the park. Only the panorama, which offers itself to the visitor, is wonderful. Situated on the hills above the village of La Lajita, the zoo offers great views of the sea from many locations.

Also the area itself is beautifully laid out. Many plants and partly dense vegetation line the paths between the enclosures. In addition to bird of prey and sea lion shows, there is also the possibility of a ride with camels. In addition, more than 3000 animals in 250 species can be found here.

More things to do and activities for your Fuerteventura holiday

Fuerteventura: Beach Yoga Session on Lobos Island
Tours
2 Reviews
from 39 $ Â»
Take part in a yoga session on the Protected Natural Park of Lobos Island. Reconnect with nature with your certified yoga instructor in a tranquil seaside location.
From Corralejo: Corralejo and Playa Blanca Ferry Transfer
Nature & Adventure
from 32 $ Â»
Take a comfortable ferry transfer to the Lanzarote Playa Blanca Pier from the Fuerteventura Corralejo Pier on a Naviera Armas cruise with a return ticket.

We recommend the following months as best time to travel for exploring the attractions and acivities of Fuerteventura:

You can find more information about the weather, including all climate data, on our climate page for Fuerteventura.

You already did a Fuerteventura holiday and know other sights or interesting places? Then share your travel tips with us and our website visitors. Among all submissions, we’re giving away a travel voucher worth 1000 $.