Things to do in Jordan: Attractions and places to visit

The Kingdom of Jordan is currently still one of the less well known destinations for Germans, but the country offers thousands of years of history, very hospitable locals and fantastic beaches.

The varied landscape and the world-famous excavation sites make Jordan an extremely interesting holiday region for both cultural travellers and bathers.

Below we present you the most exciting tours, the most beautiful attractions and the best sights in Jordan.

TOP10 Things to do Jordania: Table of Contents 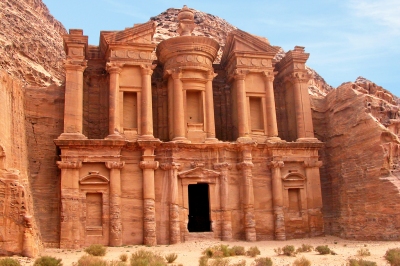 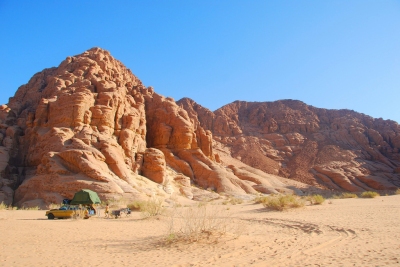 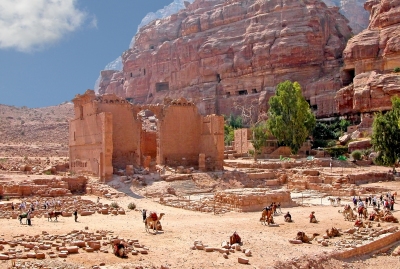 The ruined city of Petra is one of the most important sights in the Middle East. Petra is a cultural and natural wonder at the same time, situated in the desert of the Edom mountains, halfway between the Gulf of Aqaba and the Dead Sea. This favourable position allowed the town to blossom into an important trading centre between the 5th century BC and the 3rd century AD.

Access is through a narrow gorge. Petra owes its excellent state of preservation to this hidden location between rugged rock faces. The elaborate facades of the tombs, carved into the rock, have been UNESCO World Heritage Sites since 1985. The most famous buildings of the excavation site are the so-called treasure house in Hellenistic style and the Roman theatre.

Most travellers will land at the airport of Jordan’s capital Amman. Today, the metropolis is a modern city with numerous sights that bear witness to its eventful history. The Roman amphitheatre is the highlight during a city tour. It dates from the 2nd century and fits into a flank of the Jaufa hill.

It is one of the best-preserved theatres of its time and impresses especially with its 95 metre wide stage building and excellent acoustics. A whisper on stage can be heard well on any of the 6000 seats. Since its restoration in the 1950s and 60s, it has been regularly used for events during the summer months. Other highlights for visitors to Amman are the Citadel, the ruins of the Hercules Theatre and the Ahl al Kahf Necropolis.

The place Kerak in the west of Jordan is already mentioned in the Bible as “Kir” or “Kir-Moab”. The imposing crusader castle was built at a strategically favourable location and served as a stopover for the crusaders in the 12th century. It is enthroned on a rocky promontory and shows a mixture of crusader architecture, Byzantine and Arabic elements.

All entrances are underground for defensive reasons and there are no gates. Today the fortress also houses an archaeological museum. From its highest point, the visitor is offered a magnificent view that reaches as far as Jerusalem on a clear day.

Amman: Petra, Wadi Rum, Red Sea & Dead Sea 2-Day Camp Tour
Culture & History
50 Reviews
from 155 $ »
Visit the ancient rock-carved city of Petra on a private 2-day tour from Amman. Go to the Dead Sea and float in its mineral-rich waters. Discover where the movie “Lawrence of Arabia” was filmed. Spend the night in a Bedouin camp in Wadi Rum and more.
From Amman: Private Day Trip to Petra with Pickup
Culture & History
35 Reviews
from 49 $ »
Discover the highlights of the historical city of Petra on a day trip to the archaeological site from Amman. Marvel at the rock-carved Treasury and get panoramic views from the High Place of Sacrifice.
Petra Full-Day Private Tour from Amman
Culture & History
37 Reviews
from 42 $ »
Petra, an ancient city located in the Jordan desert, once dominated the trade routes of ancient Arabia. On this full-day excursion from Amman you’ll see the main attractions of this UNESCO World Heritage Site with a private English-speaking guide.

The mars-like desert landscape Wadi Rum lies east of Aqaba and is one of the most important tourist attractions in Jordan. As 4000 year old rock paintings prove, the landscape was already inhabited in prehistoric times – today several Bedouin tribes live here, whose main source of income are now tourists from all over the world.

It is a good idea to visit the Visitor Centre at the entrance to Wadi Rum and find out about this labyrinth of bizarre rock formations up to 1750 m high. There are possibilities for camel rides, jeep safaris or overnight stays in tents. An excursion to this UNESCO World Heritage Site is certainly an experience you will not forget for the rest of your life.

The at first glance inconspicuous city of Madaba reveals several spectacular attractions in the form of detailed floor mosaics. The most important of these works of art is located in St. George’s Church and represents a map of Jerusalem and the Holy Land in the 6th century. The mosaic, composed of more than two million stones, is invaluable because it also contains descriptions of landscapes and cities in Greek.

Since various biblical stories have also been described, it is most likely a map for pilgrims. In the archaeological museum of the city and its garden, further mosaics can be seen, which show in a fascinating way scenes from the everyday life of humans, mythology or the animal and plant world. For those who are interested in art, a trip to Madaba is highly recommended.

Only about 30 km southwest of the city centre of Amanns, in the middle of an extremely barren landscape, rises the 808 m high mountain Nebo, which plays an important role in the Old Testament when God Moses lets Moses look from there into the promised land. On the summit there are fragments of one of the oldest churches in the world and a newer church with a monastery belonging to the Catholic Franciscan Order.

The view to Israel and the Dead Sea is unique and a visit can be wonderfully combined with a visit to Madaba. Thus you have two important sights in Jordan combined in a pleasant way and will collect unforgettable impressions.

Private Half-Day Tour to Madaba and Mount Nebo
Tours
12 Reviews
from 30 $ »
Enjoy a fantastic tour to Madaba and Nebo. Madaba, home to the famous 6th century Mosaic Map of Jerusalem and the Holy Land and Mount Nebo, where Moses is said to have seen the Holy Land before he died, with views down into the Jordan Valley.
Petra in a Day: Private Tour from Amman
Tours
20 Reviews
from 70 $ »
See the main sights of Petra in a few hours on a full-day tour from Amman. Transfer by modern sedan or H1 van along the desert highway to Wadi Mousa. Visit the rock-carved Treasury and stunning Monastery. Walk between the hills to the Place of Sacrifice.
From Amman: Dead Sea and Madaba Tour with Hotel Pickup
Tours
16 Reviews
from 65 $ »
Take in the top attractions of Madaba on this 10-hour tour. Visit Mount Nebo and the Jordan River Baptism Site, and relax on the Dead Sea Beach.

In the green valley of Gilead in the north of Jordan is the huge ruined city of Jerash, which together with Petra is one of the most popular sights of the country. Its heyday dates back to the first centuries after Christ, when Jerash was also called the “Pompeii of the East”. Within the city walls, archaeologists excavated numerous temples, colonnaded streets, paths and houses that give a good impression of how a Roman city was built at that time. If you are interested in culture and history, you should plan a trip to Jerash, which is about 40 km north of Amman.

Jordan is also a great place for adventure holidaymakers. The Mujib Nature Reserve on the east coast of the Dead Sea is considered to be the deepest nature reserve on earth. It is located in a gorge where rivers and differences in altitude have created a biological diversity that attracts nature lovers from all over the world year after year. Flora and fauna can be discovered with experienced local guides.

At least 10 predator species (including jackals, wolves and wild cats) and rare birds, which find a safe habitat here, live in the areas, some of which are very difficult to access. Numerous hiking routes cross the reserve and allow breathtaking impressions, especially in the early morning hours when the sun shines on the orange and red rocks.

Who hasn’t seen photos of bathers in the Dead Sea? The high salt content of up to 30%, the sunny weather all year round and the low humidity are the reasons why people with skin problems and joint diseases find relief here.

In the Jordanian resort of Sweimeh there are numerous hotels that have adapted to this type of holiday. An unforgettable experience is a swim in the Dead Sea, where a sinking is impossible even for non-swimmers, for every tourist and should not be missing on any excursion program.

From Amman: Amman, Jerash and Dead Sea Day Tour
Tours
5 Reviews
from 60 $ »
Enjoy a full-day private tour from Amman escorted by a professional English-speaking driver. Take in the Amman Citadel and Roman Theater before moving on to Jerash city and the Dead Sea Beach.
From Amman: Petra, Rum, Aqaba and Dead Sea 3-Day Tour
Culture & History
20 Reviews
from 265 $ »
Enjoy a 3-day private tour for 1-7 people to some of Jordan’s highlights. Go to the rock-carved city of Petra. Spend the night at a Bedouin camp in Wadi Rum. Pass through Aqaba City in the Great Rift Valley. Watch the sunset over the Dead Sea.
Amman to Petra Half-Day Transfer
Tickets
22 Reviews
from 75 $ »
Discover the historical city of Petra, Jordan’s most valuable treasure and greatest tourist attraction, on this day tour from Amman.

Jordan is still relatively unknown to us as a beach holiday destination. The southernmost town of the kingdom on the Red Sea is a true paradise for swimmers, divers and snorkelers. Due to the excellent infrastructure in Jordan, the combination of cultural and beach holidays is easily possible.

Aqaba offers wonderful sandy beaches and the offshore coral reefs are a perfect spot for observing the colourful underwater world. Parrotfish, manta rays and reef sharks are abundant in the Gulf of Aqaba.

More things to do and activities for your Jordania holiday

Transfer from QAIA to Amman (& v.v.)
Transportation
13 Reviews
from 15 $ »
Transfer from Queen Alia International Airport (Arrival Exit gate) to Amman accommodation by a modern air conditioned new vehicle with a professional English speaking driver who will look for your name on a personalized sign.
Half-Day Tour to Umayyad Desert Castles from Amman
Tours
13 Reviews
from 51 $ »
Delve deep into the history of Jordan on this half-day tour to the Umayyad Desert Castles in the Eastern Desert. Enjoy round-trip transportation and the expertise of your private guide.
Day Tour Dead Sea from Amman
Tours
8 Reviews
from 27 $ »
Enjoy a return tour from Amman to the Dead Sea and appreciate the spa and health effects of the Dead Sea.
Private Tour to Dead Sea and Baptism Site
Tours
7 Reviews
from 150 $ »
Visit the Baptism Site (El-Maghtas in Arabic) on the Jordan side of the Jordan River. It is one of the most important recent discoveries in biblical archaeology where John the Baptist lived and Jesus was baptized.
From Amman: Jerash, Umm Qais, and Jesus’ Cave Private Trip
Tours
3 Reviews
from 39 $ »
Explore some of Jordan’s historical and ancient treasures and ruins on a private day-trip to northern Jordan. Discover Jerash, Umm Qais, and the cave of Jesus Christ near Pella.
2- Day Petra Overnight Tour From Amman
Culture & History
2 Reviews
from 149 $ »
Explore Petra on a 2-day trip hiking through natural reserves and beautiful scenery. Enjoy a 2-hour guided tour of Petra, visit castles and monasteries, and relax overnight after your exciting day.

We recommend the following months as best time to travel for exploring the attractions and acivities of Jordania:

You can find more information about the weather, including all climate data, on our climate page for Jordania.

You already did a Jordania holiday and know other sights or interesting places? Then share your travel tips with us and our website visitors. Among all submissions, we’re giving away a travel voucher worth 1000 $.