Things to do in Rome: Attractions and places to visit

Rome is not called the “Eternal City” for nothing. Modern buildings stand side by side with Roman temples and ancient ruins. The city can look back on three millennia of history. The capital of Italy is located in the Lazio region on the Tiber River, which winds its way through the city centre.

Rome is alive and versatile. Romans roar with temperament honking their horns on their Vespas through the narrow alleys of the old town. In the evening, romantic candlelit restaurants tempt you with pizza and pasta. Hardly any other city has so many attractions to offer in such a small space as Rome. Many are within walking distance.

Below we present you the most exciting tours, the most beautiful attractions and the best sights in Rome.

TOP10 Things to do in Rome: Table of Contents 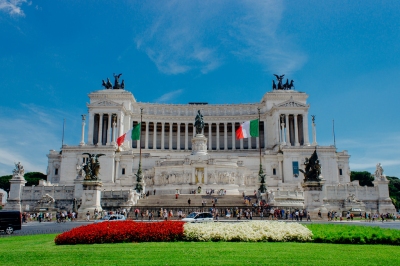 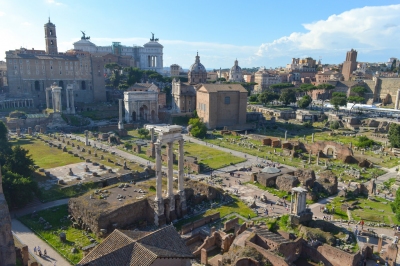 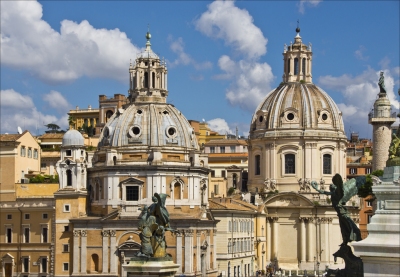 It is the landmark of Rome and the most popular sight of the city – the Colosseum. The ancient amphitheatre was built during the reign of Emperor Vespasian in 72-80 AD. Here were held games for the edification of the people. The already technically very sophisticated arena could be provided with various stage sets and even flooded. Animals had to fight against animals, humans against humans or animals.

In addition to the bloody games, acrobats, musicians and normal artists also performed. Later, the Colosseum was left to decay. Natural disasters damaged the building heavily and for a time the Colosseum was even used as a quarry. To this day, the Colosseum is the largest amphitheatre in the world ever built and one of the new Seven Wonders of the World.

The Forum Romanum was the centre of ancient Rome. Nestled between Palatine and Capitol, not far from the Colosseum, the Forum lies in the heart of the city. Public and political life took place here. Temples and lively markets were the meeting places for the Romans.

War and peace were decided in the Senate and from here the conquests of the Roman Empire began. Today the Curia is only one of the surviving witnesses of the time. The remarkable ruins of temples and churches allow the visitor to immerse himself deeply in history. The Roman Forum also houses the place where Julius Cesar was murdered.

The 320 m deep square, which is ellypse-shaped around the Egyptian obelisk, is framed by two arcades with four rows of columns. If you place yourself in the focal points of the ellypse, marked by two marble slabs, the four rows of columns merge optically into one. This is the genius of Bernini. A unique experience is the ascent to the dome of St. Peter’s Cathedral. From the top you have a unique view over St. Peter’s Square and the whole of Rome.

Vatican, Sistine Chapel and St Peters Basilica Tour
Tours
35 Reviews
from 76 $ Â»
Have the essential experience in the Vatican City, exploring the Vatican museums, Sistine Chapel, and St. Peter’s Basilica.
Rome: Colosseum, Roman Forum, Palatine Hill Priority Tickets
Culture & History
18211 Reviews
from 23 $ Â»
Get into the Colosseum, Palatine Hill, and Roman Forum in central Rome through the fast track entrance with a combined package. Enjoy a hassle-free experience at your own pace. Marvel at the remains of some of the greatest monuments of the Roman Republic.
Rome: St. Peter’s Basilica Guided Tour
Tours
2695 Reviews
from 29 $ Â»
Join a tour of Saint Peter’s Basilica. Delight in the hidden wonders of the Renaissance. See Michelangelo’s PietĂ  and the Bernini masterpieces.

For centuries, the popes have collected treasures that are now kept in the Vatican Museums. They were founded between 1471 and 1484 at the request of Pope Sixtus IV and are among the most important museums in the world. Here you will find works of art from all ages, old masters and unique sculptures.

A work of art are also many rooms themselves, which are decorated with impressive frescoes and ceiling paintings. One day alone is hardly enough to look at everything exhibited here. The highlight of every visit is the Sistine Chapel. Under the famous ceiling painting by Michelangelo, history is written in every papal election.

Between 135 and 139 Emperor Hadrian built the Engelsburg as his mausoleum. Other regents found their final resting place here. Later it became the property of the Vatican and served as an escape route for the popes. An underground passage connects the Angel Castle with the Apostolic Palace in the Vatican City State. This enabled the popes to flee unnoticed in danger.

The name Engelsburg goes back to a legend. While the plague raged in the city, Pope Gregory I the Archangel Michael appeared over the castle and announced the end of the plague. The stature of the archangel sits enthroned above the angel’s castle as a memory. From up there you have a wonderful view of the eternal city.

Financed by the French and called the Spanish Staircase, one of the most beautiful architectural features adorns the Italian capital. 135 steps lead from Spanish Square up to the French Basilica of Santa TrinitĂ  dei Monti. Locals and tourists alike are attracted and stroll down the stairs or take a break on their flat steps. In the evening the Spanish Staircase becomes a romantic meeting point.

Street musicians, rose sellers and the illuminated Baracaccia fountain at their feet make the ambience perfect. The building itself was preceded by a long dispute between France and the Holy See. Finally, the plans of the French favourite Francesco de Sanctis were accepted and the staircase was built in the Italian Baroque style.

The idea of a further highlight of Rome arose in an architectural competition announced by Pope Clemens XII. Nicola Salvi won with his fountain design, which focused on the theme of water. Today the Trevi Fountain is one of the most visited sights in Rome and is the central point of contact. For legend has it that anyone who tosses a coin over his shoulder into the fountain will return to Rome.

The 50 meter long pool and the baroque wall with the sea god Neptune dominate the small square of the same name. The Tervi Fountain is the largest fountain in the city. The innumerable coins that accumulate in the well bring in each year a good sum for charitable purposes and perhaps also the one or other wish fulfills itself.

The Pantheon is one of the oldest ancient buildings in Rome and served as a temple for all Roman gods. It was built by Marcus Agrippa in 27 BC. After it was destroyed by lightning, Emperor Hadrian erected the building in its present form in 119 AD. The Pantheon is a mystical and impressive place.

The mighty dome spans the interior and served as a model for the dome of St. Peter’s Cathedral. Through an opening, a ray of sunlight falls into the interior, which for a long time served as a burial place for famous personalities. The tombs of King Vittorio Emanuele II and the painter Raphael can be found here.

Somewhat off the beaten track, on the western side of the Tiber, lies the small district of Trastevere. Trastevere is like a village in the big city. Narrow alleys with cosy trattorias and small shops invite you to stroll and relax. There are no museums or big sights here, but there is a real Italian flair and a relaxed atmosphere.

In the evening the quarter attracts with its lively nightlife and inviting little bars. Two main roads run through Trastevere, but it is worth exploring the small alleys to the right and to the left to get a glimpse of authentic Rome.

Rome: Trevi Fountain and Underground Guided Tour
Tours
17 Reviews
from 38 $ Â»
Explore one of the top highlights of Rome an expert guide. Visit the Trevi Fountain and discover that it is more than meets the eye, then visit the ruins of the ancient aqueduct 9 meters below ground.
Rome: 35-Minute Pantheon Audio Guide Tour
Culture & History
1564 Reviews
from 9 $ Â»
Take a 35-minute audio guide tour of the Pantheon to learn about its fascinating history and how it converted from a pagan temple to a Christian church.
Rome: 4-Hour Traditional Food Tour and Wine Tasting
Tours
564 Reviews
from 110 $ Â»
Taste the foods and wines of Rome on a 4-hour walking tour of the historic center from Campo deâ€™ Fiori to the Trastevere. Sample the best of Italian cuisine in unique locations and local eateries that produce only the highest quality produce.

“The Mouth of Truth” is a curiosity of the city. This is a 19 cm thick round relief of marble with a diameter of 1.75 m. The relief shows a face with eyes, nose and open mouth. His age is 2000 years. It hangs at the entrance of the church Santa Maria in Cosmedin. His origins could never be fully clarified.

One assumption is that this is a kind of ancient canal or well cover of the Cloaca Maxima. An old legend says that if you hold your hand in the mouth of the relief and lie, it will be bitten off. A famous film scene with Audrey Hepburn and Gregory Peck from the film “A Heart and a Crown” made the Bocca della veritĂ  famous and a popular sight.

More things to do and activities for your Rome holiday

Colosseum & Forum Ticket with Multimedia Video
Culture & History
1910 Reviews
from 32 $ Â»
Visit Rome’s most famous monuments, the Colosseum, Roman Forum, and Palatine Hill. Collect your tickets and enjoy a multimedia video about the city’s history at the local partner’s office.
Rome: Shuttle Bus Transfer to or from Fiumicino Airport
Activities
1555 Reviews
from 7 $ Â»
Hop onboard a shared shuttle bus transfer between Fiumicino Airport (FCO) and central Rome. Be greeted by staff who will help you onboard, and enjoy the free Wi-Fi and air-conditioning.
From Rome: Pompeii and Mt. Vesuvius Volcano Full-Day Trip
Tours
1493 Reviews
from 120 $ Â»
Explore the intact remains of the Roman town of Pompeii and climb the mountain that destroyed it. Get panoramic views of the Bay of Naples and Amalfi Coast from its summit (during summer).
Rome: St. Peter’s Basilica Dome to Underground Grottoes Tour
Tours
1452 Reviews
from 48 $ Â»
Discover the wonders of St. Peterâ€™s Square and Basilica with a professional guide. Visit the Dome and soak up panoramic views of Rome, then go underground to admire the historic grottoes.Â
Rome: Street Food Tour with Local Guide
Tours
1033 Reviews
from 46 $ Â»
Combine a guided walking tour of Rome with one of the best things to do there, tasting authentic Roman delicacies. Choose either a private or small-group tour and try artisanal goodies such as supplĂ¬, pizza and gelato.
Rome: City Center Highlights Tour by Electric-Assist Bicycle
Tours
967 Reviews
from 82 $ Â»
Join a 4-hour city center tour of Rome on a power-assisted electric bike so you can see even more and go even further. With an expert guide, see Romeâ€™s top highlights, visit its hidden corners, and effortlessly scale the cityâ€™s famous hills.

We recommend the following months as best time to travel for exploring the attractions and acivities of Rome:

You can find more information about the weather, including all climate data, on our climate page for Rome.

You already did a Rome holiday and know other sights or interesting places? Then share your travel tips with us and our website visitors. Among all submissions, we’re giving away a travel voucher worth 1000 $.