On this page, you will find information about the climate and the best time to visit Cascais. We created climate tables and charts for the location of Cascais. These contain details about temperatures, precipitation and more.

Furthermore, we analyzed all climate data and provide a recommendation about which months are best to visit Cascais for your holiday.

1. Geographical location
2. Climate in Cascais
3. Best Time to Travel for Cascais: Overview
4. When is the best travel time for Cascais?
5. Climate Chart Cascais
6. Climate Table Cascais
7. Sights & Attractions
8. Popular Activities
8.1 More Attractions
9. Current Weather and Forecast
10. Portugal: Regions
11. Share your Experience and Win
Cascais is located in the Lisbon region. Portugal’s capital Lisbon is about 16 miles from Cascais (as the crow flies). The coastal city is a medium-sized town in the Lisbon region of Portugal with a population of about 36,436 people and is one of the largest towns in Portugal.

Once a picturesque fishing village, today a colourful and pretty holiday resort with elegant pedestrian zones, fashionable shops, restaurants and bars. The coast around Cascais offers a variety of beaches from family friendly with calm waters and soft sand to wild and rough surf beaches.

The coastal town is surrounded by popular beaches such as Guincho Beach in the west and the lush Sintra Mountains in the north. A part of the coast is rocky and attracts tourists for its seascape and other natural attractions such as Boca do Inferno.

It will also be a popular destination for golfers with more than 10 golf courses nearby. Surfing, sailing, windsurfing and kitesurfing are also popular in the Cascais region because of the favourable weather, wind and sea conditions. In 2007, Cascais was the official host of the ISAF World Sailing Championship for inflatable boats and racing yachts. 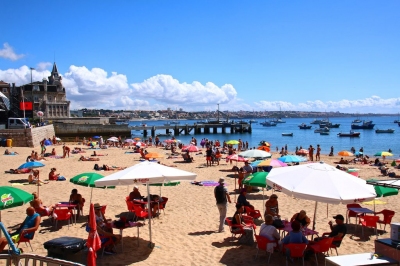 The region is blessed with beautiful weather for three quarters of the year, starting in early spring and extending well into late autumn. The temperature is suitable for staying on the beach lasts from May to mid-September. Early spring and late autumn are ideal for exploring the region and for an active holiday.

In midsummer (June–August) the weather is hot and dry with intense sunshine. This high season can be a bit exhausting for exploring, sightseeing or for small children. The proximity of the coastal city to the Atlantic Ocean means that there is often a cooling breeze at night and the area does not experience the extremes of other Mediterranean countries.

Cascais sea temperature is always cool, even in summer when the water temperature reaches only 21 °C. The winter months can be unpredictable with an equal number of bright, clear days and grey, humid days. In general, the weather is too cold to spend time on the beach, but in winter there can be great bargains.

When is the best travel time for Cascais?


The best time to visit Cascais is during the early summer and late summer months before and after the peak of the tourist season. This is a great time of the year to visit Cascais as you can combine the time on the beaches with exploring Sintra and Lisbon.

Cascais is a great holiday destination offering breathtaking beaches, wonderful day trips and a vibrant nightlife. Cascais has a fantastic climate that is suitable for tourists from early spring to late autumn. In general, we recommend the entire period from mid-April to mid-October as the best travel time for the region.

In the following, you will find the climate table for Cascais, containing information about Temperatures, Precipitation, Water Temperatures, and Hours of Sunshine.


Today there is a large marina and several small sandy beaches in and around the city. The coastal city is easily reached by car from Lisbon (motorway A5 Lisboa-Cascais or the scenic “marginal” road) or by frequent commuter trains. It has the ruins of a castle, an art and sea museum, as well as parks and the charming cobbled streets of the historic center. The city has many hotels and apartments as well as many good restaurants with different prices.

It is a good base for those who visit Lisbon and its surroundings, who prefer to stay outside the city, but in an equally urban and challenging environment.

If you want to explore the East, you can take the motorway or the 30-minute train to Cais do Sodré station in Lisbon and visit the many museums, parks and districts such as Alfama. If you feel the urge to travel further, there is a city airport in Tires and the international airport Lisbon Portela is only 45 minutes away.

More information about the best things to do: Portugal

Sintra: Pena Palace and Park Skip-the-Ticket-Line Entrance
Seasonal & Holiday Activities
3767 Reviews
from 15 $ »
Marvel at Pena Palace, one of the most magnificent and recognisable tourist attractions of Portugal. The palace exemplifies the 19th century Romanticism style of architecture and stands atop a rocky peak, which is the second highest point in Sintra Hills.
Sintra: Castle of the Moors Fast Track Ticket
Culture & History
579 Reviews
from 8 $ »
Explore the classic ruined castle established during the 9th century and built with fortified stone walls. Marvel at the wonderful panoramic views over the hills of the Serra De Sintra.
National Palace of Sintra and Gardens Fast Track Ticket
Culture & History
226 Reviews
from 11 $ »
Explore Palacio Nacional Sintra, the only palace built during the Middle Ages by Portuguese monarchs that has survived to the present day virtually intact. This monument is distinguished by its outstanding historical, architectural, and artistic value.

Cascais is part of the holiday destination Portugal. We analyzed the climate for additional regions, in order to provide you with information about the best time to visit and the expected holiday weather:

We want to know: how was the weather during your Cascais holiday? You can win a travel coupon of 1000 $. The price will be raffled among all submissions. 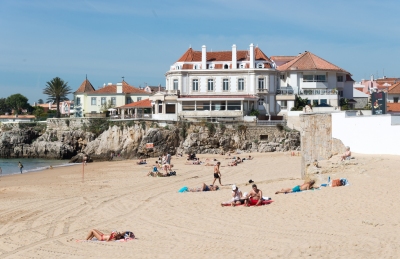 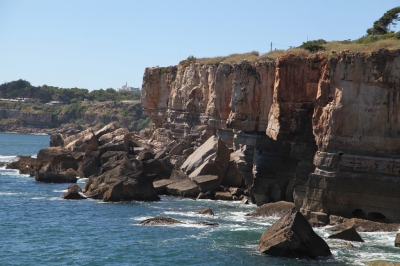 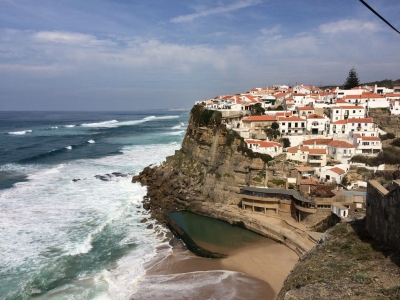