On this page, you will find information about the climate and the best time to visit Chicago. We created climate tables and charts for the location of Chicago. These contain details about temperatures, precipitation and more.

Furthermore, we analyzed all climate data and provide a recommendation about which months are best to visit Chicago for your holiday.

1. Geographical location
2. Climate in Chicago
3. Best Time to Travel for Chicago: Overview
4. When to go to Chicago?
5. Climate Chart Chicago
6. Climate Table Chicago
7. Highlights and Attractions
8. Popular Activities
8.1 More Attractions
9. Current Weather and Forecast
10. USA: Regions
11. Experiences of our Visitors
12. Share your Experience and Win
Chicago is located in the northeast of the state of Illinois. About 2.7 million inhabitants live within the city limits on an area of about 380 square miles. Chicago is also a metropolitan region with a total area of over 17000 square miles and almost 10 million inhabitants.

This results in a population density of 4,615 inhabitants per square kilometre and thus roughly corresponds to the level of Munich (4,600 inhabitants per km²), the statistically most densely populated city in Germany. 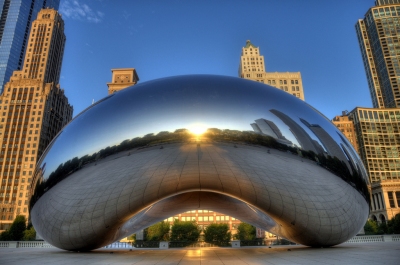 Chicago has a continental climate, with hot summers and cold winters. The average temperature is -6.2 °C in January, whereby extreme cold periods with values of -10 to –18 °C are not unusual. In return, the day temperatures from June to August are almost always above 27 °C and easily exceed 30 °C on hot days.

Chicago has a statistical maximum of 10 rainy days per month, the rainy month is usually April. In the warm months of June, July and August the weather is fantastic with up to 10.5 hours of sunshine daily. The highest temperature in Chicago was 41 °C in 1934.

During the North American cold spell in 1985, a minus record of –33 °C was set. This shows the extremes that the continental climate in Chicago (Illinois) can reach. The city on Lake Michigan has around 30 beaches on its shores, which are popular destinations for locals and tourists from all over the world, especially in summer.

When to go to Chicago?


The humidity in Chicago is quite high all year round, which makes the cold winters and spring months seem even harder. Basically a cosmopolitan city like Chicago is of course open all year round, but the temperatures from November to April can be a real challenge for vacationers.

From May it gets noticeably warmer, the summer months are hot and in autumn Chicago still remains sunny and mild. Accordingly, the best time to travel to Chicago in Illinois is from mid-May to the end of September. October can also be a wonderful time to travel to the city on Lake Michigan in warmer years.

You must have heard of the nickname “Windy City” as Chicago’s nickname. Many travel guides associate this term with the strong wind that often whistles through the skyscrapers of the skyline. However, historians attribute the term “Windy City” more to the windy activities of certain smuggling gangs that were once very common in Chicago. Other sources said that the inhabitants of Cincinnati gave Chicago this somewhat derogatory epithet.

No matter whether it is a small rivalry between Ohio and Illinois or “Windy City” has a completely different origin: The fact is that Chicago is not significantly windier than other coastal cities in the USA according to official weather records and measurements.

In the following, you will find the climate table for Chicago, containing information about Temperatures, Precipitation, and Hours of Sunshine.


Basically, Chicago itself already offers a number of great sights, especially in the cultural field, the metropolis is a pioneer. The city is known for its distinctive theatre culture, the Goodman Theatre is not only the focus of the region at Chicago Theatre Week. Important museums such as the Astronomy Museum and the Adler Planetarium as well as the Museum of Science and Industry offer interesting impressions even in bad weather.

Architecturally there are many buildings from the Bauhaus style to admire, not least fascinating are the Lake Point Tower and the Willis Tower as the tallest building in Chicago. The Skydeck Chicago observation deck (in Willis Tower) offers a fascinating panoramic view of the city, Lake Michigan and the surrounding area. Also impressive is the Blcik of the Ferris wheel at the popular Navy Pier.

The Millenium Park with the famous Cloud Gate is another attraction of the city. This highly polished sculpture is also called “The Big Bean” because of its shape and is probably the most popular photo motif in Chicago. Near Lake Michigan, the impressive Buckingham Fountain, one of the city’s landmarks, also attracts visitors with great water shows and lighting effects.

Chicago River Architecture Cruise: Skip-the-Ticket-Office
Tours
3203 Reviews
from 38 $ »
Cruise along the Chicago River on a 60- or 75-minute tour, and discover hidden architectural gems among the city’s renowned landmarks. Led by a docent providing live narration, the tour passes more than 40 structures and sails under historic bridges.
Chicago River: 1.5-Hour Guided Architecture Cruise
Tours
714 Reviews
from 40 $ »
Experience Chicago’s legendary architecture from the best seat in the house: the river. Enjoy a comprehensive tour with a live fun guide as you navigate through the heart of the city covering all 3 branches of the Chicago River.
Chicago: Navy Pier Centennial Wheel Regular & Express Ticket
Nature & Panorama
450 Reviews
from 19 $ »
Soar to heights of nearly 200 feet over Navy Pier, with unparalleled, 360-degree views of Chicago and Lake Michigan. Choose between pre-purchasing a Regular or a Fastpass Express ticket to experience this iconic part of the Chicago skyline.

Chicago is part of the holiday destination USA. We analyzed the climate for additional regions, in order to provide you with information about the best time to visit and the expected holiday weather:

Chicago: Experiences of our Visitors

There are 3 reviews for Chicago holiday already. Average rating is 3.3 of 5 stars.

We want to know: how was the weather during your Chicago holiday? You can win a travel coupon of 1000 $. The price will be raffled among all submissions. 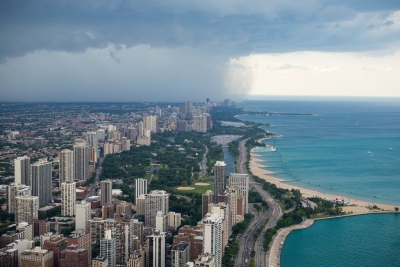 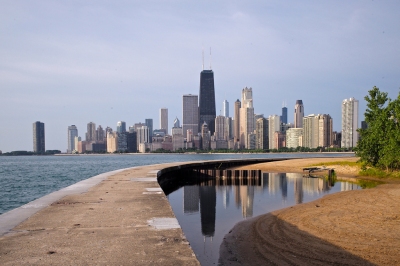